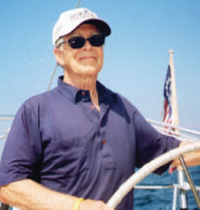 Since graduating in 1950, Ed has been an ongoing supporter of the School, serving as an Annual Fund volunteer and attending many events over the years. When it came time to make his Opening Minds Campaign gift, however, Ed had to do some critical thinking about the best way to make his Campaign gift while at the same time maximizing his tax benefits and preserving inheritances for his family. Fortunately, in 2006, the Pension Protection Act was passed, allowing Ed and other donors age 70½ and older to make distributions from an IRA account directly to qualified charities such as BB&N.

By using the Charitable IRA Rollover as his gift method, Ed avoided paying the income tax on the distribution directed to BB&N, and the distribution also counted against his required minimum distribution from the IRA. Under the Pension Protection Act of 2006, all individuals age 70½ and older were allowed to make tax-free distributions of up to $100,000 from their IRAs directly to qualified charities.

In December 2015, Congress made permanent many of the tax provisions passed in previous years, including the IRA Charitable Rollover, offering philanthropists another option for charitable giving. For those who may be burdened by their required minimum distributions from their IRAs, have already maximized their allowable charitable contributions, and/or are in a tax bracket whereby they start to lose some of their deductions, the IRA Charitable Rollover may make good sense. We encourage you to explore this option with your accountant or advisor.

Since making his Campaign gift and continuing his support of The BB&N Fund, Ed has made a provision to include the School in his estate plans through his will, thereby creating a lasting legacy as have other members of The Almy Society.