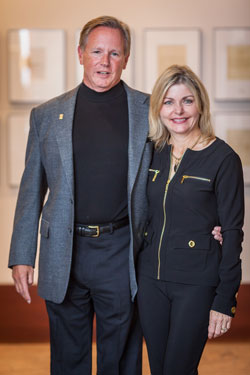 When Mark Satterfield '73 arrived at Browne & Nichols in ninth grade from the Lincoln Public Schools, he says, “I really was the definition of ‘average’. OK-not great student. Moderately coordinated athletically. A bit on the shy side..” However, in reflecting back now on his high school years, he credits B&N with providing him with both encouragement and a variety of opportunities to try new things. “One of the great things about the B&N experience was that you were encouraged, and even in some cases, required, to try new things. Had I gone to the public high school, I’m sure I would have been too shy to try out for plays or pursue athletics. As a result of this encouragement I graduated with a wealth of experiences that have served me well over my career.”

Chief among these was an interest in English and writing. “I was fortunate to have a series of teachers who made writing a fun and creative experience. As a result I became quite comfortable putting pen to paper and to date have written 8 books, a few of which have become best sellers.”

After attending college at Washington University in St. Louis and majoring in English, Mark’s initial career began in consumer package goods with PepsiCo & Kraft Foods, before starting his own marketing & advertising agency in the early 1990s. “Leaving the comfort of a large corporation to pursue an entrepreneurial dream requires a fair amount of belief in oneself. Looking back, a large part of that self-confidence is directly attributable to the mentoring and support I received while at B&N.”

On a visit to BB&N last fall, Mark and his wife Marian reflected on their recent decision to include the School in their estate plans, thus joining The Almy Society along with others who have done the same. In thinking about their philanthropic priorities and the legacy they wanted to leave, they agreed that BB&N made a lot of sense. As Mark noted, “For me, B&N was life changing. I entered as a 9th grade student without a lot of belief in myself and left with both life long friends and a level of maturity I doubt I would have gained elsewhere.”

A large part of Mark & Marian’s decision to support the school came as a result one of his fellow classmates. “John Fitzpatrick commented a while back about the scholarship he received in order to attend B&N, the positive impact the school had on his life, and how that motivated him to give back to the school. I was moved by John’s comments and thought that it would be wonderful if Marian and I could provide a legacy that would enable some deserving individuals from future generations to benefit from the BB&N experience.”